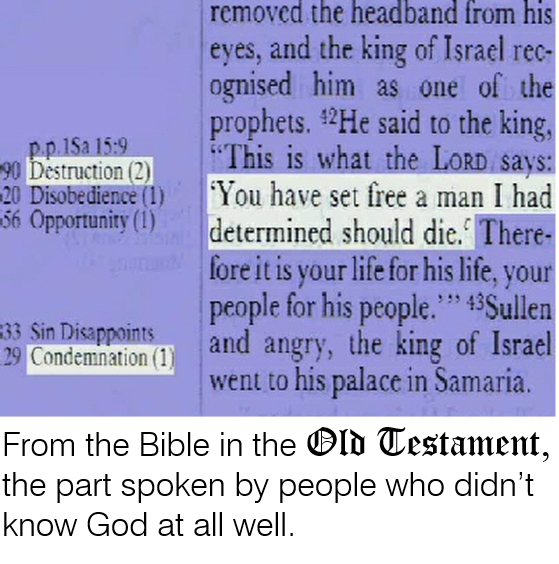 The relationship between the Old Testament Historical Narrative/Conventional Religious Thinking and the Testimony of Christ is a great deal more than between just old and new ways of thinking. Essentially, the relationship is a dialogue between the man-made image of God and the image of God as a man of eternity. The consequence of canonising the two narratives as one ‘Holy Book’ not only makes a mockery of Christ as the Saviour of a humanity trapped in a never ending loop of self destruction but falsely gives credible evidence that war is divinely inspired as shown by the Jews who slaughtered innocent souls in the name of their God, including God’s Son, eventually.

The Rest of the videos 2-8
The rest of the videos talk about ignorance, fear and death as stages of spiritual regression spawned by the Old Testament.
Tony Benn touched on this topic of political control used by rigid ideological systems in an interview with Michael Moore for his excellent documentary ‘Sicko’, in which he spoke of ignorance, fear and death as devices used by Government to keep populations subservient to the idea that only people with big egos, big wallets and big guns, should be rewarded.
Old Testament ideas about ‘possessing the land’ is symptomatic of a spiritual condition that negates consciousness of eternal values to do with sharing the Earth and all its resources equally without borders.

Our new type of physical world is obsessed with a new kind of materialism but this has not come about without the influence of an old type of spiritual world obsessed with ‘possessing things’. The possession of land by the few who think they own it in perpetuity is the greatest curse on social development.
Jesus possessed nothing but his words of liberation and freedom, that set him free from the curse of death that comes to those who think they can possess God’s creation.

“Yet you are ready to kill me, because you have no room for my word. I am telling you what I have seen in the Father’s presence, and you do what you heard from your father. You belong to your father, the devil, and you want to carry out your father’s desire.”
John 8:37~

Mark Golding
Brought up in public house environment and sent to a traditional boarding school. Spent my early years in bedsits in London where I mixed with some rather unsavoury people. Became a drug addict. Experienced a new life and transformation of character surrendering myself to Christ. But never could reconcile the narrative of the Bible with the narrative of Jesus Christ entombed within.
RELATED ARTICLES
Videos