The correct word for war – defence 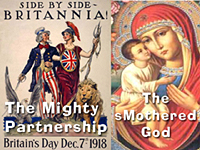 The gradual introduction of new speak into the lexicon of war narratives, of using the word ‘defence’ instead of ‘war office’, as a title for a national militia for example, is a post modern phenomenon.

Like most post modern sciences of manipulation and control the architects of order rely on standard social engineering techniques, that slowly transforms human value in a lottery game where the right of one group to live by their standards is protected at the existential cost of another group.

Gradually, from the Old Testament outwards, military fanaticism has bleached out all sense of human worth. The Old Testament way of forcefully imposing values and beliefs eventually leads to nihilism – the devaluation of life.
It wasn’t until 1947 that both the US and UK Military regimes decided to sweeten the concept of annihilation by calling their respective War offices Dept of Defence and Ministry of Defence, which is new speak for old regimes dating back to the 16th Century in the UK. In America the Military Command Centre was called The United States Department of War and in the UK it was called British War Office.
The word War has been dropped as not being very politically correct but the destruction of God’s children remains top priority.