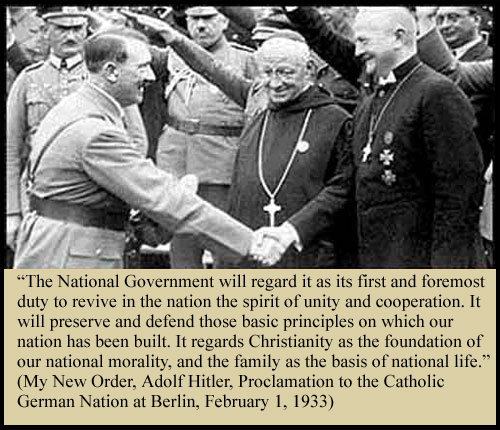 17th September 2010
Bringing another take on Hitler. The regime that the German public supported in the 1930’s raised their hopes and aspirations for their place in a new prosperous and powerful nation. The social contract between citizen and State in Germany manifested its strength in numerous ways, that involved human agencies for national transformation such as US industrial banking cartels that heavily invested in Hitler’s innovating approach to new technology that made use of developments by IBM, Standard Oil and IG Farben to improve production of the raw materials for his kriegsmachine. Investments from US and foreign banks ensured Hitler’s third reich was giving returns to Wall Street investors. The picture with this news item shows approval by the Catholic Centrum willing to be part of a photo shoot in Hitler’s massive propaganda campaign. ‘Look see, even the church is with me’
Moreover, the insidious relationship between Church and State at cabinet level where war makers hatch their plans, means that God is inevitably dragged into the human theatre of genocide. God has always been dragged into the affairs of grubby tyrants against his will through representation by the ancient device (aka Old Testament) of pomp and ceremony, the razmataz of the spectacular media ‘gaze’ and the War Narrative (aka BBC).
Now the archetype Pope this week, addressing HM Queen says Hitler “wished to eradicate God from society and deny our common humanity to many, especially the Jews, who were thought unfit to live.” This is a false take on history. Hitler was a believer, who thought God was on his side because he thought God was a God of war as portrayed in the Old Testament and as portrayed by countless national heroes throughout European history who have all imitated, not Christ, but a foreshadow of him created by a culture incessantly reinventing its total ignorance of the true nature, character and will of God.

It was a marriage of convenience between Hitler and the Vatican, one which disenfranchised the Catholic laymen. As Hitler cynically put it:

“We should trap the priests by their notorious greed and self indulgence. We shall thus be able to settle everything with them in perfect peace and harmony. I shall give them a few years’ reprieve. Why should we quarrel? They will swallow anything in order to keep their material advantages. Matters will never come to a head. They will recognize a firm will, and we need only show them once or twice who is master. They will know which way the wind blows.” [Guenter Lewy, The Catholic Church and Nazi Germany (2000), pp. 25-26] SeeHitler’s Concordat 1933

The Pope’s speech is carefully prepared political correctness at best and an attempt to keep the masses ill informed at worst. The tactical reference to ecumenicalism can always be exposed as sham under the scrutiny of Papal Bulls and the hierarchical structure of military and Roman church life.

Jesus, please give courage to your disciples to expose those in high places who abuse their power and to not be afraid of those priests and leaders who murder the body but cannot destroy the soul.