Masters of the Universe Video 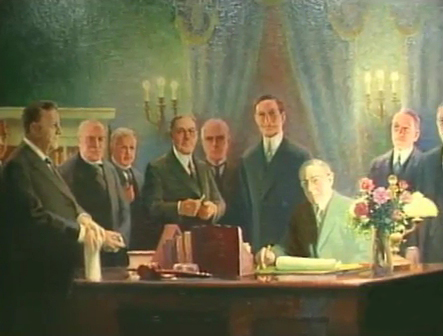 The reasons given by the official PR of Governments for the involvement of their citizens in war is not always the truth, the whole truth and nothing but the truth.
Historians have a habit of digging out information from declassified documents that show a slightly different version of vents leading up to war and the preparation for war. The Iraq Dossier for example that Tony Blair quoted verbatim in the House of Commons has turned out to contain faulty, if not fabricated, intelligence.

In the run up to war such variants of the truth produced by the media creates doubts in the mind of lower ranking soldiers in the armed forces to be absolutely certain they are risking their lives for the right reason. They are trained to trust the command structure and to obey orders like automatons. On the contrary, many senior ranking civil servants and officers with access to classified information do possess the upper hand of knowing secrets but this does not necessarily mean the information being passed to them represents a truthful analysis of the events either. It is also pertinent to remember that certain privileges are probably extended to those members of the officer class whose families own vast chunks of the nation’s treasure like rented farmland, and banking cartels that lend to Government, so that they can see clearly how the outcome of a war might benefit the enormous economic power held by their fellow countrymen bearing similar coats of arms of distinction, sharing similar extravagant lifestyles and wearing similar inherited titles of a Manor full of Rare Collections. What brings a large proportion of the country’s cash flow into the pockets of the few is very much reliant on the maintenance of military power and the production of weapons of mass destruction.
Decisions made by war strategists, therefore, might have more to do with the protection of the wealth held by the few than it does with the assessment of threat to the lives of citizens. Democracy is postponed frequently by denizens and servants of the privileged classes.

Nothing is exactly as it seems. Everything is communicated through a tightly controlled channel of information in which political and ideological filters are applied at source by those who prepare the official Press Releases for the main newswires. The irony is, knowing the history of weapons supply by the US and UK businesses to Saddam Hussein, the power of the terrorism message, linking Iraq with terrorism, which was repeated daily over the airwaves, on TV screens and in the newspapers, virtually achieved a national lobotomy disconnecting the public’s mind from reality, creating in its place a monster figure called Saddam Hussein who had weapons of mass destruction aimed at the West that could be deployed in 24 hours.

This video is one of many hundreds circulating around the world among people who distrust the media and their Governments.

Masters of the Universe

Mark Golding
Brought up in public house environment and sent to a traditional boarding school. Spent my early years in bedsits in London where I mixed with some rather unsavoury people. Became a drug addict. Experienced a new life and transformation of character surrendering myself to Christ. But never could reconcile the narrative of the Bible with the narrative of Jesus Christ entombed within.
RELATED ARTICLES
Money