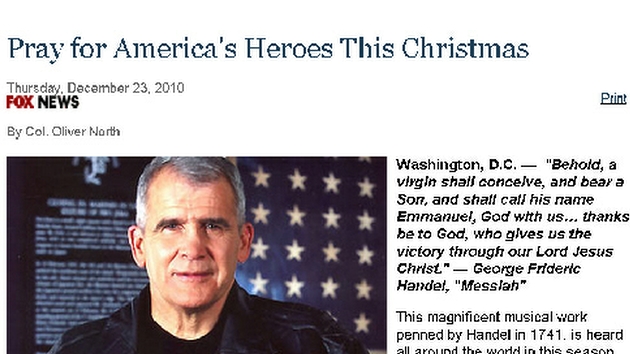 Fox News Article Christmas 2010
An article in FoxNews by Col. Oliver North typifies the confusion in the minds of the military concerning their relationship with God.
He opens his article with a verse that contains the phrase, ‘thanks be to God, who gives us victory through our Lord Jesus Christ.’
Presumably Mr North thinks that the word victory in the original context meant military victory or something akin to that, like a spiritual transformation of the soul that changed the heart of man to be so God like, as to have the courage to smash another skull in battle like the way the Pharisees smashed Jesus in the face with their fists? (Pharisees that believed God was on their side). Or like the way the Knights Templars slaughtered Muslims and innocent bystanders in their pointless meaningless crusades to recover the ‘Holy Land’, financed by bloodthirsty sadistic royal families and their fawning priests, while kissing the cross and proclaiming Christ?
The church has become so besotted with a book containing satanic verses, verses that tell lies about the true nature and character of God, that it is not surprising throughout its history it has harboured, and given prominent place to, the cult of Luciferian doctrines, that portray the dual personality of love and murder as one manifestation of God as found in the Bible.
Jesus Christ has nothing to do with the construction of the Bible. He would never have endorsed the bibliographic concept of a canon, but he would have endorsed his words as the canon since they constitute forever the only book of life by which you Mr North, and myself, will be judged at the end of time.

Would Mr North, and readers of Fox News, please read my lips, ‘The Creator of life is not a God of War who gives victory to brutish men fighting on behalf of brutish priests in pointless wars that achieve nothing in eternity but only death and destruction on a temporal Earth’.