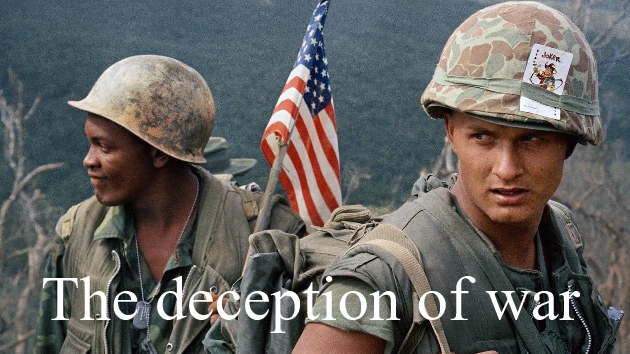 Comfortably embedded in a somewhat affluent matrix of political power that depends on propaganda and lies for its upkeep, journalists have no balls when it comes to standing up for the thousands of people our military establishments in the UK, US & NATO are murdering every day.

The low paid worker in Great Britain, a member of the working class majority, not only works as a slave within this matrix but also surrenders his mind to the media that knows exactly how to shape public opinion to place in a good light his master and ruler.

The organisation of war is ungraciously dependent on the organisation of public comfort, the creation of the feel good factor (i.e. national security). It is deeply associated with the common purpose of the rich who need wars to protect their control of global economic markets that keep a small privileged section of society in close proximity ad infinitum to the money supply that incidentally still flows freely outside of any democratic control. A democracy that is not to be confused with the ‘free market’.

The objective is to first win the war of public opinion about national security by pounding public consciousness with creative variations of the just war theory which, slowly slowly, in small imperceptible steps through creative and yet cynical programming, constructs in the public mind the concrete existence of an enemy, of a communist under the bed or a terrorist lurking in every city. By repeating the word terror, terrorism and terrorist at a frequency recommended by gestalt psychologists for maximum impact upon the suggestibility and sensibility of the average Joe public’s mind, the Warrior Class of Plutocratics, Bankers and Landlords achieve their first objective. The conditioning of plebiscite politics. A wholly deceptive, Hegelian, illuminati type of nihilistic social engineering programme is strategic to the very long term goals of an elite class exploiting their power of hidden knowledge. (An example of what I mean by Hidden Knowledge is not the esoteric philosophical/religious type that fills the narrative of Sophists believing themselves to be the Illumined Ones but the secrets of how raw political power functions at a super state level where major intelligence networks co-ordinate the overthrow of democratically elected world leaders. As in the overthrow of Iran in 1953 for example, an operation run by MI6 and the CIA, where the knowledge of how raw political power operates behind the facade of Western democracy was kept hidden by staff who destroyed all the material evidence held by Government agencies so that future historians would have no primary source material on which to mount a revision of history. A revision for showing future generations the reality behind historical events and for helping the public to understand the true meaning of ‘national security’.

This is where the media serves the purpose of those who want to organise a war. The media is there to conceal the history as it unfolds and to play out in its place an illusory version in order to keep the public primed for accepting the normalcy of carnage and the systematic annihilation of innocent souls. Future generations, when all the blood has been spilt in pointless battles, can observe from a distance the lies and deceptions of war when Governments release embargos on selected secret documents and cynically place some sensitive material into the public domain. The whole system is designed to keep a lid on public awareness, to hide the truth, and keep hidden the real reasons for sending young men and women to fight on foreign soil.
War making relies on the profound use of gestalt psychological programming, otherwise known coarsely as ‘brain washing’. The propaganda machine of the mainstream media tilted US public opinion in favour of a war in Vietnam in the 1960’s by using the idea of a communist threat to national security as the enemy of the US people. The main news wire went ballistic demonising Communism. The threat of Communism, not terrorism, was pictured by journalists in a syndicated press, TV and radio matrix as the enemy to the personal welfare and security of Americans in the 1970’s also. As a consequence of this, young men and women naively threw themselves into the Vietnam war and died bravely in jungle warfare, as young Europeans did before them in the jungle warfare of the First and 2nd world wars, relying on information fed to them by a media matrix that kept up a cynical and bifurcating war narrative.

An aspect of gestalt psychology is that it has a blanket application when used by the media. Prior to the NATO attacks on Libya the main news wire drip fed the European news agencies with PR from Whitehall or wherever that smothered European consciousness with the need for ‘humanitarian’ intervention in Libya to help a ‘liberation movement’ (a rogue band of thugs) to overthrow Gaddafi legitimately in the name of democracy and freedom. Almost a year on and we see no more PRs being recycled in the media about humanitarian intervention in Libya even though the need now is even greater than when Gaddafi was in power as the country descends into chaos and misrule. The Western Oligarchs achieved their aims in terms of hoodwinking the Europeans but now they have fallen silent over the ensuing chaos since their media coup d’etat.

HM Government and the US Government are yet to be held accountable not only for the blatant lies they told to their respective ‘lower houses’ about the reasons for the war on Iraq but for the tens of thousands of souls which have perished or been made homeless since the War Arena was instigated under their total supervision and control.

The web of lies used by Governments even extends to the subtle invention of newspeak, an almost Orwellian change of semantics to alter public perception of the same beast. The Offices of War and Attrition in both Governments had their names changed to Departments of Defense after the pointless 2nd World War was concluded. It was Winston Churchill who started using the term ‘Defense’ but it wasn’t until 1947 that the semantics was altered. Same brutal undemocratic office of hidden naked power but with a sweeter sounding name. ‘Ministry’ has a servant connotation while ‘Defense’ denotes victim but the semantics is misleading since neither meaning reflect the true nature of war making.

The reliability of the information used in Government propaganda to get public opinion behind the front line troops who rely on public support to bolster their nerve in battle is not easy to verify. The information that is gathered is called ‘intelligence’ but there is no way in the world that the public can be guaranteed that the information they are given through the media is based on provable facts. In the context of a labrynthian military industrial government complex, run by efficient circles of the wealthy elite who are adept at misinforming the public through public relations networks secreted away in the paneled inner sanctuary of State, the role of Parliamentarians and Representatives is a frustrating one. The Iraq War Enquiry effectively slipped a rope around their necks when in July 2012, the British Attorney General Dominic Grieve vetoed the release of documents to the Inquiry detailing minutes of Cabinet meetings in the days leading up to the invasion of Iraq. Concurrently, the Foreign Office successfully appealed against a judge’s ruling and blocked the disclosure of extracts of a conversations between Bush and Blair days before the invasion. The British government alleged that revealing the content of a phone call between Bush and Blair before the invasion, would present a “significant danger” to British-American relations.

The feeling is that we are misgoverned by a Government that has Military Power at its disposal which is not being used entirely for the benefit of the UK citizen and which abuses the life of soldiers who put their trust in a chain of command they believe is above reproach.

All too often it is discovered later in history that the political dynamics behind events leading up to conflict which were reported in the press as the ‘x’ reason at the time, turn out to be ‘y’, a wholly different story. By this time it is too late to recompense the loss of thousands of souls who might have thrown their lives away on the ‘national security’ ticket for nothing at all.

Lies and half truths are told with impunity and thousands lose their lives as a consequence. War is a lie. Soldiers need to wake up to the reality that they may be serving, not a country, nor a Queen, but one great big mother of a lie.

Mark Golding
Brought up in public house environment and sent to a traditional boarding school. Spent my early years in bedsits in London where I mixed with some rather unsavoury people. Became a drug addict. Experienced a new life and transformation of character surrendering myself to Christ. But never could reconcile the narrative of the Bible with the narrative of Jesus Christ entombed within.
RELATED ARTICLES
Truth I Lies